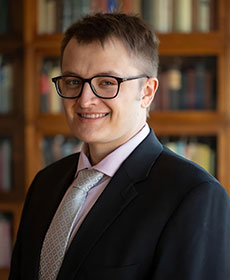 Taylor Volkman joined Benezra & Culver as an associate attorney in February of 2021. His practice includes all aspects of employment law and civil rights litigation.

While at the University of Denver Sturm College of Law, Mr. Volkman received a Scholastic Excellence Award for achieving the highest grade in his legal writing class. As a student, Mr. Volkman also received the Reese Persuasive Writing Award and a Distinction for his commitment to the public good.

Mr. Volkman served as a student attorney in DU’s Civil Rights Clinic for two years. There, he worked on an Eighth Amendment lawsuit against the Federal Bureau of Prisons and successfully obtained early termination of the client’s supervised release. As a student attorney, Mr. Volkman also authored two briefs of amicus curiae that were filed in the United States Supreme Court in support of civil rights litigants. He authored and filed similar briefs in the 3rd, 7th, 8th, and D.C. Circuit Courts of Appeals.

Mr. Volkman started working at sixteen years old, and has worked a variety of jobs at restaurants, landscaping companies, an auto body shop, and a call center. He knows what it is like to be an employee in a difficult workplace, and as a result, he is passionate about advocating for the rights of employees and underdogs.

Mr. Volkman is currently involved in local professional organizations including the Colorado Plaintiff Employment Lawyer’s Association and the Colorado Bar Association’s Civil Rights Section. Mr. Volkman is admitted to practice in the Tenth Circuit Court of Appeals, the United States District Courts for Colorado, and all Colorado state courts.