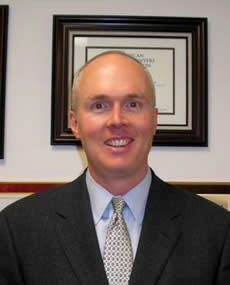 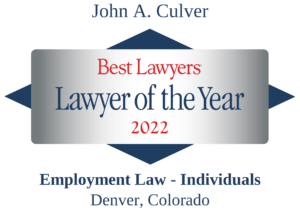 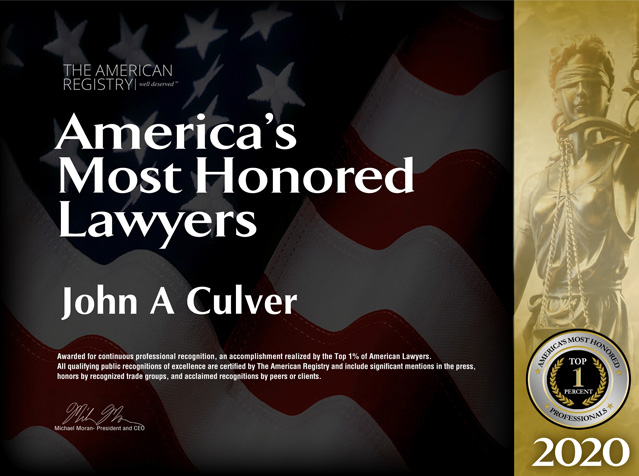 Awarded for continuous professional recognition, an accomplishment realized by the Top 1% of American Lawyers. All qualifying public recognitions of excellence are certified by the American Registry and include significant mentions in the press, honors by recognized trade groups, and acclaimed recognitions by peers or clients.

Mr. Culver’s skills and achievements have been repeatedly recognized by his peers, as well as the Colorado judiciary. Most recently, Mr. Culver was elected to be a Fellow in the exclusive and prestigious College of Labor and Employment Lawyers. He was also named the 2014 Civil Rights Lawyer of the Year by Best Lawyers, the 2015 Colorado Constitutional Lawyer of the Year by Global Law Experts and the 2018 Lawyer of the Year for Employment and Labor Law by Lawyer Monthly.  Mr. Culver has also been acknowledged as one of the Best Lawyers in America and one of the Top Rated Labor and Employment Lawyers in America by the National Law Journal and the American Lawyer. Since 2006, Mr. Culver has been recognized as one of Colorado’s top attorneys through Law and Politics and 5280 Magazine’s “Super Lawyer” nominations.  From 2008 to the present, Mr. Culver has been voted as one of the top 100 trial lawyers in Colorado by the National Trial Lawyers Association.  He has also received a prestigious AV rating from Martindale-Hubbell for Preeminent Skills and Ethics. Martindale-Hubbell has also designated Mr. Culver as a Top Rated Lawyer in Employment and Labor Law. He has been named a Top Lawyer in Colorado by Best Lawyers, a Best Lawyer in Denver by the Denver Post, and a Top Lawyer in Denver and Beyond by 5280 Magazine.

Mr. Culver’s knowledge of employment and civil rights law is without peer.  Since 1997, Mr. Culver has instructed future lawyers in employment law, public sector employment law, civil rights litigation, and civil litigation as an adjunct professor at the Denver University College of Law.  He also regularly instructs members of the Bar regarding similar topics, including as a lecturer at the National Convention for the National Employment Lawyer’s Association, the Annual Retreat of the Plaintiff’s Employment Lawyers Association, and numerous others.  He has also appeared on Denver’s local network affiliates, as well as the ABC Nightly News, HBO Inside Sports, The Reggie Rivers Show and TheBradshaw Difference concerning his civil rights work. Mr. Culver is a former Co-Chair of the Colorado Bar Association’s Labor and Employment Section.

Mr. Culver is an experienced litigator and trial lawyer with a proven track record of success for his clients.  As just two examples, Mr. Culver served as lead counsel in the certified age and benefits discrimination class action, Vaszlavik, et al. v. Storage Tech., which settled for $5 million and significant affirmative relief.  He was also lead counsel in Drake v. TalMor Capital Management, LLC, and Edmond Melhado, in which this firm obtained a $3.5 million judgment (including attorney fees and interest) on behalf of their client.  This is one of the very largest single plaintiff judgments in a Colorado employment case.